Home / Archive 2016 / Getting the Rail Trail Back on Track 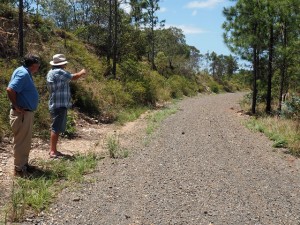 The plans for establishment of a bike path along the now disused rail corridor between Maryborough and Hervey Bay have been around for a while, but have stalled for one reason or another.

I recently inspected sections of the corridor with members of Hervey Bay’s Bicycle Users Group and have been talking to some of the architects of the scheme. I think we can get it back on track, especially if we develop in stages that won’t overstretch the budget.

The proposal has a lot of positives. It provides a sporting amenity that a large cross-section of the community can use, it will promote a healthy lifestyle, and it will be an important part of our tourist infrastructure. It will provide a safe cycling option between our two major cities.

The trail can be developed so that families can enjoy riding or hiking parts of it, to take in scenery that isn’t presently accessible. It will provide a recreational facility for those who aren’t able to ride the whole distance, and in time the council can develop a few picnic areas along the way.

The Wangaratta – Bright trail in Victoria attracted about 50,000 riders a year, which is a significant tourist drawcard.

One of the advantages of this proposal is that the engineering plans have already been developed, and the work can start as soon as funding can be found. We should be applying for funding from State and Federal governments. While the total project is not cheap, it can be developed in stages and savings may be possible by using crushed granite or similar rather than sealed surfaces.

The Urraween to Nikenbah section is very nearly at a stage where it could be used now, and it wouldn’t cost much to have it finished. Other sections can be completed as funding becomes available.

For more information on the potential of rail trails, visit the website of RailTrails Australia.

Industry and Development: Some Innovation Awards?Little Things That Count